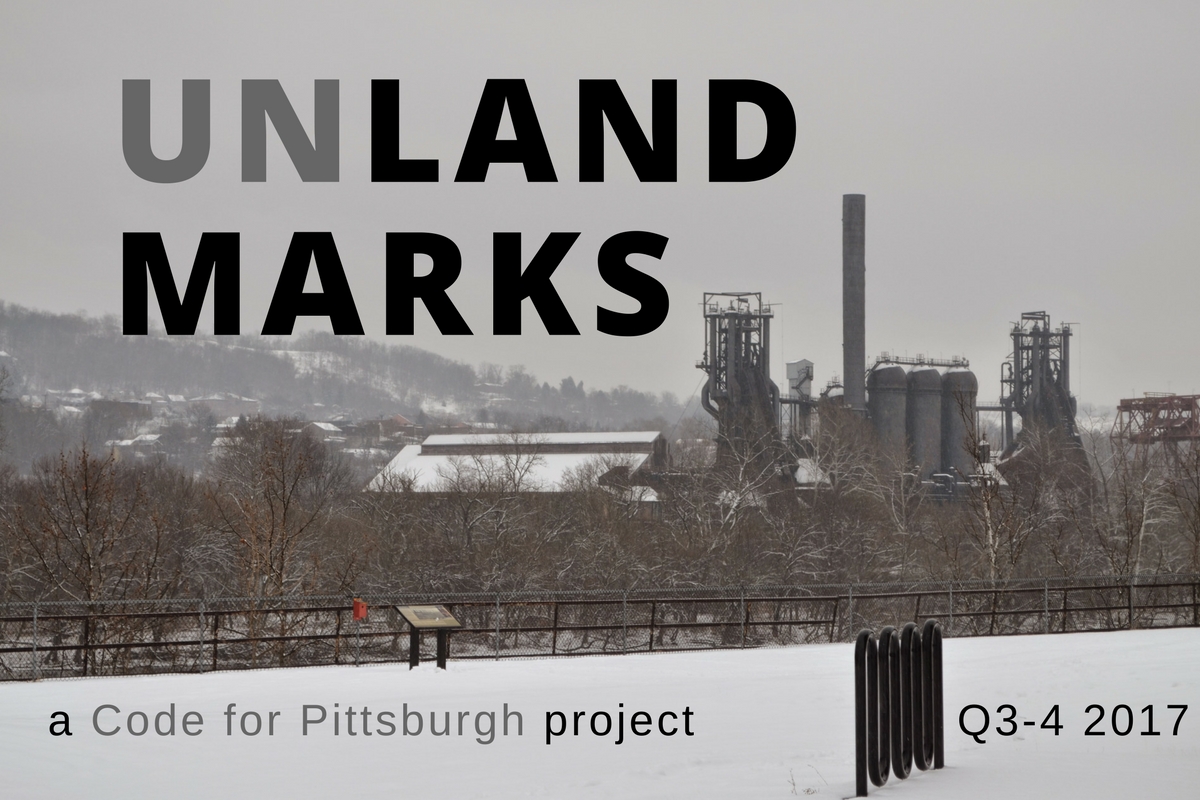 A map of everything that isn’t there anymore. It’ll give driving directions, too.

Pittsburghers have serious respect for their city’s history. Many local businesses and monuments that once existed in their surround, and are held now only in the memories of long-term residents.

We are a city in many ways haunted by the past. You can see in the scarred grid of the city the spaces where great engines of industry once stood.

Newcomers get lost in our city. It isn’t easy to give them directions. Three rights never make a left. The waypoints described are often long-gone, making the directions useless to someone who is new in town.

It’s a friction point - a split between the city’s newer residents and those who have lived here for decades.

But it isn’t - it is endearing and it cements the knowledge of what came before into the memories of a new group of residents. It means neighbors talk to neighbors, and that’s always good in this town.

Since August 2017, Code for Pittsburgh has been be building a map of landmarks that are gone. Buildings, businesses, public art, noteworthy trees, we want to hear about it all. We want to get it all down in one place that everyone can access. We want to make a free and open record of those historical landmarks, and the stories people have there.

The Unlandmarks Map will reveal and detail historical injustices. It will show the rent-raising which closed down minority-owned businesses, the murals which were painted over, the unique houses which were knocked down for bland concrete apartments, the jazz nightclubs lost to the Civic Arena.

It will also reveal high points - industrial achievements at a scale that might not be seen again, bustling neighborhood shops, art from an earlier time.

In 2017, with the city growing in population & density, with neighborhoods changing rapidly, the map will also serve as a muse - an expansion of what communities believe is possible to build going forward. Main Streets across town will be filling back up shortly, and knowing this corner used to have a ice cream shop might encourage us today to return that building to its former use.

This work grows out of our work on the Fish Fry Map and the Police Blotter, two previous community mapping projects. Connor Sites-Bowen is the project lead.

There are many ways to engage with the project (tap below):

- Nominate a landmark for inclusion on the map. (click here!)

- Join our Meetup Group to get invites to our events going forward.

- Request an invite to our Slack.

The intent of the project is to create a shared set of community memories. The places and stories of the past are individual - this map brings them together, and forms a set of data meant for the whole community.

These are not gifts for Code for Pittsburgh - they are gifts to the greater Pittsburgh community. As such, they are available under the Creative Commons Zero (CC0) license, which allows for full and complete use and re-use, with no need for attribution (though it’s nice!).

In simple terms, the map and all associated community data is in the Public Domain as soon as it is submitted. Anyone in the world is free to use, reuse, borrow, write up, print out, research, re-use, or in all other ways make use of the data. The community made it, and everyone gets to use it.

Together, we are building a shared, available, open public history, for ourselves, and for generations to come. Thank you to everyone who has gifted their stories so far.

We’re the region’s Civic Technology meetup group, part of Code for America’s Brigade Network. We’re a loose association of change-makers, enthusiasts, hobbyists, coders, artists, map-makers, and other focused on making life in Pittsburgh better. We place an emphasis on technology’s role in shaping our public experiences, and in knitting our city together.

We intend to learn all kinds of things in the next six months. Check out our past Meetups for some ideas of what we’ve been learning so far. We’ll be hosting learning events as we build the technology. We’ll be hosting community events to record landmarks. We’ll be hosting online methods of adding data, and, eventually, verify, research, etc.

We are so excited to get started. Join your friends and neighbors, and lets build a map!

Huge prior art goes to Stuff That’s Gone and Things That Aren’t There Anymore, the two Rick Sebak Documentaries.